From Strugglers
Jump to: navigation, search

This article is targeted at someone who is participating in an ongoing Bitcoin trade on LocalBitcoins. If you've found it by some other means then it might not have the right context for it to make any sense to you.

You've most likely received a link to this article because you're currently in a Bitcoin trade with me on LocalBitcoins and I've already asked you once to cancel the trade. You have ignored this request for more than a few minutes, and/or are wanting to have continued conversation.

Why you were asked to cancel

I will have asked you to cancel the trade most likely because you haven't read the trade instructions and the trade is not acceptable to me. The trade is never going to happen, regardless of what you say or do. There is no way for the trade to happen. It needs to be cancelled.

We can carry on having a conversation but since the trade is never going to happen the polite thing to do would be to cancel it now. Cancelling it doesn't stop us from continuing to have a conversation, it just returns my Bitcoins to me.

There's a button marked "Cancel" on the left.

Why I need you to cancel it

My Bitcoins are held up by this trade. This trade is never going to happen. I can't sell them to someone else until the trade is cancelled, and you're the only one who can cancel it. 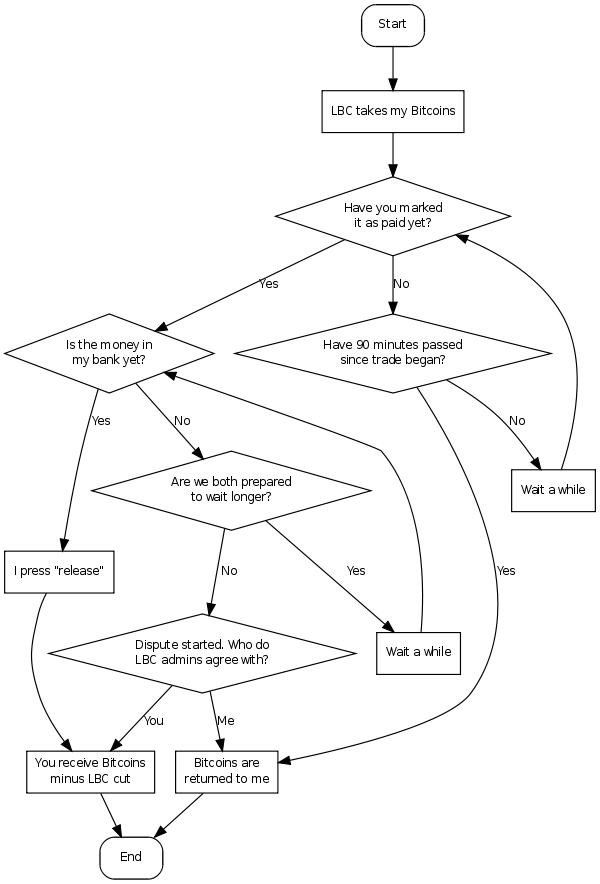 So, as you can see, if you have opened a trade but do not press cancel then my Bitcoins will be held in escrow for up to 90 minutes without me being able to sell them to anyone else. This is not very polite of you.

What happens if you don't cancel it

Eventually even if you don't press cancel the trade will time out and my Bitcoins will be returned to me. If you allow my Bitcoins to be held in escrow until timeout then I will block you and give you negative feedback. This will most likely harm your feedback score and will make it harder for you to trade with anyone else.

Also, even though you opened a hopeless trade because you didn't read my trading instructions and/or didn't understand how real names on LocalBitcoins work, I will generally still be happy to trade with you at a later date once you have managed to get your real name verified. However if you've held up my Bitcoins in a pointless trade until LBC timed it out then you'll be blocked by me and never able to trade with me.

Therefore no matter how mad you are at me for not wanting to trade with you, the rational thing for you to do is to cancel the trade.