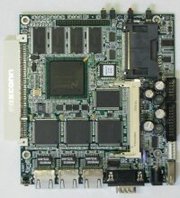 Recently I bought a Soekris net4801 from kd85.com. This article is about my experiences installing Debian sarge onto it.

Soekris boards are essentially complete x86 computers on a single board. The net4801 offers the following on its main board:

Notice there are no VGA, keyboard or mouse connectors. All communication with the net4801 goes over serial, or by normal network means once you've installed an OS on it.

The practical goal was to get a pretty much fully-functioning Linux box onto small low-power hardware with no moving parts, to replace my home firewall/DSL router/NAT gateway that I had running on an old PC. With no moving parts it would be silent, energy-efficient and hopefully very reliable.

Note however that for what they are, Soekris products are very expensive! My order, after the 21% tax of Belgium (where kd85.com is) and shipping to UK, came to just over 250 Euro - and that's before the cost of the CF is counted. If you just want a Linux box that can do DSL, routing, firewalling and NAT then you will find it much cheaper to get something like a Linksys WRT54G and install OpenWRT firmware on it. Alternatively if you wanted a full machine to install your chosen operating system on then you could build a mini-ITX-based machine. That would cost more, but you'd get a much faster CPU and more memory.

But the geek in me wanted to play with installing Debian over PXE, having a familiar Linux distribution installed how I wanted, with a serial console to provide some administrative comforts (if you're the type of person that finds administering things over serial better than using some web interface that is...).

There are a variety of Soekris boards and add-ons, so you can add a wifi card to make a wlan access point, or a crypto card to make a VPN concentrator, or just add an extra 4-port ethernet to make a bigger router/firewall. The basic net4801 on its own was enough for my purposes.

Most of the installation instructions I gleaned from the following excellent sites:

I hit Ctrl-P to get into the comBIOS.

The first comBIOS setting to change is the serial speed; the easiest way to make every piece of software involved in booting happy is to have it all set to 9600 8N1:

At this point I had to alter my terminal emulator to 9600 as well of course.

I was planning to install over DHCP/PXE so for that I needed to know the MAC address of the ethernet card. An easy way to do that is to tell it to boot over the network. Ctrl-P again then:

The net4801 printed its MAC address to the console and started looking for a DHCP server.

Over on my DHCP server, since I'm using ISC dhcpd, the following went into dhcpd.conf:

At this point I rebooted the Soekris again and did boot f0 to be sure that it was able to get an IP address from DHCP.

Back on my DHCP server, I installed a TFTP server. My DHCP server is actually Fedora Core where the correct package is tftp-server, but on Debian I would use tftpd-hpa.

/tftpboot is the default path for files to get served out of via TFTP. As I was installing Debian I needed to get the netboot installer image, netboot.tar.gz from a Debian download site, and unpacked it in /tftpboot:

The pxelinux.0 that comes with netboot does not work very well with the Soekris boards. A working image can be found as pxelinux.0.gz at http://centerclick.org/net4801/pxelinux/ which is also mirrored at http://strugglers.net/~andy/soekris/net4801/pxelinux/. I downloaded that, uncompressed it and renamed it to soekpxe.0.

With everything now in place, I was finally ready to do the install:

At this point I typed "expert26" to get the "expert" Debian Installer with 2.6 kernel.

The install proceeded just the same as for any minimal server install. Only select the minimum needed! That means just openssh really. One thing I completely forgot about before rebooting was to set the serial side of things up.

Make sure that ttyS0 is in /etc/securetty so you can log in as root from there.

in /etc/inittab so there is a getty on the serial port at all.

And after all that you should have a working Debian install, probably in about 250MB of space. You could make it much smaller if you really wanted.

The next thing I wanted to do was build a custom kernel. This would be much smaller, stripped down, and would take advantage of some features specific to the net4801's CPU. I found it advisable to run at least a 2.6.12 kernel because a number of bug fixes and Geode-specific enhancements had been added in that release.

I found useful information about a suitable kernel config at http://dev.gentoo.org/~brix/papers/net4801/net4801.html

Here follows the important parts of the kernel configuration.

Suspend modulation allows the CPU to run slower and consume less power when it is not busy.

I needed the following options to use CompactFlash. Note that the CF is not hot pluggable. It also doesn't support DMA, although a hard drive should.

I had no intention of using the USB support so I didn't bother putting support in my kernel. If I had wanted to though, I would have needed the following:

And for serial console:

The net4801 has a red error LED which is controllable from the GPIO on the SC1100.

Using a kernel with the aove support and having a device created as follows:

It is possible to turn the error LED on by writing 1 to the device and turn it off by writing 0. e.g.:

There is also a hardware watchdog feature which can be used with a user-space watchdog program to reboot the board if problems are detected.

Finally, there is also a realtime clock:

I only found the following out much later on but for those using this article as a guide I better point this out now.

There is a hardware bug with the SC1100 and similar CPUs where the TSC (timestamp counter) does not increment when the CPU enters autohalt state. Autohalt state is what happens when the CPU is idle, and it serves to reduce power consumption of the board. The effect is that the system clock appears to run very slow, often losing hours in a day. Even when using NTP, it will continually lose sync.

A workaround would be to disable CPU frequency scaling, which would result in the CPU running at full speed at all times and the maximum amount of power being used.

Fortunately for those that do not wish to do that there is a patch available which applies cleanly to 2.6.12, and may even be already present in later kernels. It can be found at http://www.gnusto.com/scx200-hr-timer.html

So after all that I had some kernel source, patched and ready to configure and compile. I recommend you do this on a normal machine, as it will be much faster than the net4801's 266MHz Geode (probably about equivalent to a Pentium 133MHz)!

That updates /boot/grub/menu.lst, too.

How I set up a read-only root filesystem.